He’s got nothing to hide, says girlfriend

DAVID SHAYLER’S girl­friend says she has no regrets about giv­ing up her luc­rat­ive career in the City to spend three years “on the run” with a man widely denounced as a self-publicist.

Annie Machon, 32, her­self a former MI5 officer and a Cam­bridge clas­sics gradu­ate, gave up her job as a man­age­ment con­sult­ant to join Shayler in his self-imposed exile. She said yes­ter­day “You don’t sac­ri­fice that amount of time and give up your whole life for someone who just wants to have a bit of fun and do this for publicity,” .

“I went on the record, ini­tially, because of all the mis­in­form­a­tion that was com­ing out about him, back­room brief­ings, all sorts of lies, that he was unem­ployed, that he was denied pro­mo­tion, that he was­n’t up to the job, even that he was sacked from MI5. 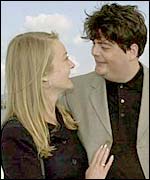 “I haven’t had much sleep,” she said after Shayler­’s release on bail from Char­ing Cross police sta­tion in cent­ral Lon­don. “I have been quite appre­hens­ive for some weeks, since we decided we should try to come back. Obvi­ously neither of us knew what to expect. He’s got noth­ing to hide. He wants to put his case to push for more openness.

“It’s good that people are pick­ing up on his cause and are begin­ning to talk about the issues he’s raised, rather than about his per­son­al­ity.” Money paid for a news­pa­per exclus­ive about his story sus­tained the two for most of their exile. They sub­sist now on his weekly column in Punch magazine.

But she feels neither can go back to their jobs as man­age­ment con­sult­ants, which they took after they left MI5. “I think things have changed so much and we’ve been through so much it would be very dif­fi­cult to go back three years to what we were then.”

The two have been togeth­er for sev­en and a half years since meet­ing in an MI5 lib­rary, but there is no talk of mar­riage. Instead, she seems con­tent with social nor­mal­ity instead of a life spent look­ing over her shoulder. Return­ing to Lon­don with a media cir­cus in train is a very dif­fer­ent exper­i­ence from when she skulked through the cap­it­al, expect­ing to be fol­lowed, bugged or arrested.

“It’s been three years almost to the day,” she said, “and it has def­in­itely taken an emo­tion­al toll. In fact, the stress of the whole thing has been quite intense.”

Last night, she and Shayler were plan­ning a quiet fam­ily din­ner. “It will be the first time in three years that we have been able to dine out openly togeth­er in Bri­tain,” she said. “I hope there will be no more look­ing over our shoulders.”