On 9 Janu­ary RT hos­ted a live streamed debate on its news show about the US intel­li­gence report that attemp­ted to prove that Rus­sia had “hacked” the US elec­tion.

I recently had the pleas­ure of tak­ing part in a debate at the Oxford Uni­on Soci­ety.  I spoke to the pro­pos­i­tion that “this house believes Edward Snowden is a hero”, along with US journ­al­ist Chris Hedges, NSA whis­tleblower Bill Bin­ney, and former UK gov­ern­ment min­is­ter Chris Huhne.

The cham­ber was full and I am happy to report that we won the debate by 212 votes to 171, and that Oxford stu­dents do indeed see Edward Snowden as a hero.  Here is my speech: 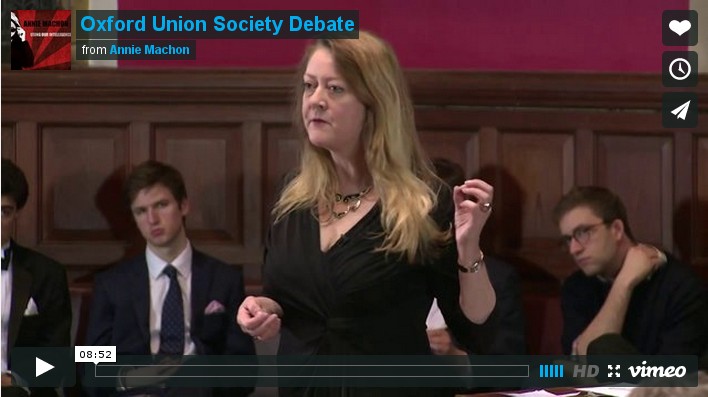 “This house believes whis­tleblowers make the world a safer place.”

I was hon­oured to be asked to say a few words at the recent debate about the value of whis­tleblowers in Lon­don on 9th April 2011.

The Front­line Club and the left-wing New States­man magazine jointly hos­ted the event, which starred Juli­an Assange, edit­or in chief of Wikileaks.  Here is the debate in full:

Need­less to say, the oppos­i­tion had an uphill battle arguing not only against logic, the fair applic­a­tion of law, and the mean­ing of a vibrant and informed demo­cracy, but also against the new real­it­ies in the worlds of journ­al­ism and tech­no­logy.

The first more dip­lo­mat­ic­ally-minded oppos­i­tion­ist adop­ted a policy of appease­ment towards the audi­ence, but the last two had to fall back on the stale and puerile tac­tics of name-call­ing and ad hom­inem attacks.  So good to see that expens­ive edu­ca­tions are nev­er a waste.…

Here’s a snip­pet of my (brief) con­tri­bu­tion to a fant­ast­ic after­noon: